The Tegan and Sara Foundation’s mission is to improve the lives of LGBTQ+ women and girls. This mission is founded on a commitment to feminism and racial, social and gender justice. This work is critically important because LGBTQ+ women and girls face greater socioeconomic and health disadvantages compared to their male, heterosexual & cisgender counterparts. The Foundation raises awareness and funds, fights for equality and justice through our flagship programming and support of grassroots organizations, activists and communities that often go unrecognized by major funding institutions. 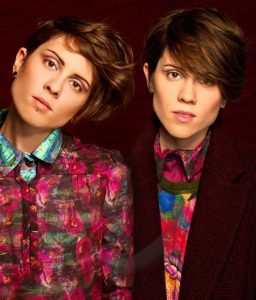 Twin sisters born in Canada, Tegan and Sara have sold more than one million albums, and have received seven Gold certifications, one Double Platinum certification, three Juno Awards, two Polaris Prize nominations, and a Grammy nomination. They have performed on some of the world’s biggest stages, from the 2015 Oscar Telecast to major festivals such as Coachella, Lollapalooza and Glastonbury.

Tegan and Sara have openly identified as queer since the beginning of their career in 1998, and have been outspoken feminist advocates for LGBTQ equality and gender justice. The essential message that underpins their worldview and identity is inclusion. The Tegan And Sara Foundation is an extension of their work, identity and longstanding commitment to supporting and building progressive social change.

There are no reviews yet.

Only logged in customers who have purchased this product may leave a review.