LGBTQ+ Book Review: This Is Our Rainbow: 16 Stories of Her, Him, Them, and Us 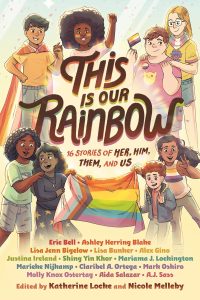 From wind-breathing dragons to first crushes, This Is Our Rainbow features story after story of joyful, proud LGBTQIA+ representation written by talented luminaries of queer youth fiction. This collection is perfect for tweens and will also be meaningful to adults who didn’t get to read this kind of representation in literature when they were middle-schoolers themselves. What’s especially meaningful about these stories is that the main characters’ gender and sexuality are merely part of their identity, and their coming out is not the whole story. There’s something for everyone, including realistic fiction, fantasies, science fiction, historical fiction, a story told in verse, and even two comics.

The stories work well with each other, and it is fun to have the variety and all the different writing styles from these bestselling authors in one collection. Friendships, family, identity, and first love are all focal points in these stories, just as they are in real life. The characters are not perfect, make plenty of mistakes, and they learn as they grow. It is impossible for me to say which story is my favorite. Just to give an idea of the range in content, here are a few quick synopses:

This is Our Rainbow cements itself not only as a valuable representation for young readers, but also as an extremely enjoyable and exceptional collection of short stories.