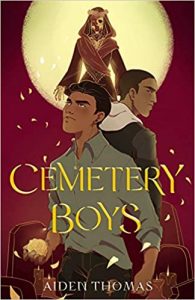 This month’s book review is Cemetery Boys by Aiden Thomas, a queer, trans Latinx author who advocates strongly for diverse representation in all media.  Published by Swoon Reads, 2020.

This Latinx young adult fantasy murder mystery is unlike anything I have ever read.  It is funny, magical, heartbreaking, at times spooky, has numerous plot twists, addresses many LGBTQ+ issues, and is fun.  It is appropriate for tweens, teens, and adults who enjoy reading young adult fiction.

Before we get started: What was the inspiration for this book?

What is brujeria?  What is a bruja/brujo?

As a kid growing up in Oakland, California, Aiden Thomas hung out at a local cemetery with his friends.  That and his Cuban/Mexican heritage are some of the inspirations behind Cemetery Boys.

The literal meaning of the Spanish word Brujeria is witchcraft.  In Hispanic and Native American cultures, the practitioners of this spirituality are brujas (female), brujos (male), and more recently brujix (genderqueer).  Modern Brujeria which is becoming increasingly popular, is magic that includes a blend of folklore, herbalism, African magic and healing, and Catholicism.  In societies, witches are often seen as “the other” and outcasts.  The Latinx community and notably queer people within this community feel they have similarly been cast aside.  Today, many Latinx people are striving to retain and cherish culture, and at the same time reclaim, empower, and celebrate the status of “the other” in combating homophobia, sexism, and other prejudices in society.

Yadriel is a Latinx trans teen boy who lives with his family in an East Los Angeles cemetery, with his powerful brujo father, Enrique Velez Cabrera being chief caretaker of the cemetery and leader of their traditional community of brujos and brujas.   Yadriel’s only wish is to be seen and accepted as a brujo by family and community – a wielder of magic who secures safe passage for ghostly spirits into their next life.  Yadriel’s family claims to accept him as a boy.  They generally use his correct pronouns, but when his grandmother gets sentimental, she tells him he’ll always be “(her) little girl.”  Most glaring, Yadriel’s father refuses to let Yadriel perform the important ritual that boys need to complete in front of Lady Death to unlock their brujo powers.  It’s as if he thinks Yadriel is in a passing adolescent phase and will change his mind.

Yadriel meets secretly with his friend and cousin Maritza, and together they successfully perform the sacred brujo ritual that his community is denying him.  Now Yadriel, with his new brujo powers hopes to help solve the mystery of the recent disappearance and death of a twenty-eight-year-old cousin Miguel, and help release Miguel’s spirit to the afterlife, finally proving to Yadriel’s community that he is a true brujo – and a boy.  When Yadriel attempts to summons the ghost of Miguel, he goofs and instead summons the ghost of Julian Diaz, a reckless troublemaker who is in Yadriel’s grade, and who has also recently died unexpectedly, without a clue as to what happened to him.  Julian is not ready to go quietly into his afterlife.  He wants to find out what happened to him, what happened to Miguel, to tie up loose ends, and to have a little fun before he leaves.  As Yadriel and Julian work together to solve the mysterious deaths, they also start falling in love, and enjoy a ghostly chilling first kiss. Will Yadriel be able to let Julian’s spirit leave for the afterlife now that they are experiencing first love?  Will the two of them with Maritza’s help be able to solve the murder mysteries as well as why other young people have recently disappeared?  Will Yadriel gain acceptance as a true brujo and a boy by his family and community?

This murder mystery paranormal fantasy novel is funny, heartfelt, intense, moving, a little scary, and fast paced from start to finish.  Cemetery Boys won numerous 2020 best book of the year awards including School Library, NPR, Publishers Weekly, and Barnes and Noble.  It was also longlisted for the 2020 National Book Award for Young People’s Literature.  Aiden Thomas is the first openly-trans author to reach the New York Times bestsellers fiction list with a main character who is trans.  Here is a link to an interview with Aiden on growing up in Oakland and making history as a trans author.

The audiobook published by Macmillan Audio is narrated by Avi Roque, a trans, nonbinary, queer Latinx actor and voice artist.  There is an excellent audio-interview between Aiden Thomas and Avi Roque at the end of the audiobook.