Once a Girl, Always a Boy: A Family Memoir of a Transgender Journey – Book Review 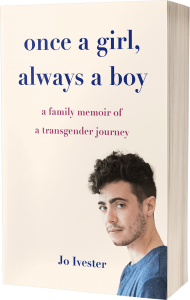 Once a Girl, Always a Boy: A Family Memoir of a Transgender Journey, by Jo Ivester
She Writes Press, 2020

This is a heartfelt chronicle of one family’s experience with having a family member transition, written primarily from Jeremy Ivester’s video logs of his transition journey, with reflections and commentary given by his mother, the author Jo Ivester, and also Jeremy’s father, Jon, and his three siblings. The narrations are like diary entries, with the timeline starting from Jeremy’s early childhood, describing himself as a tomboy, through puberty, when his gender dysphoria increases and his discomfort with his body grows harder to handle, to top surgery at twenty-three, preferring male pronouns and the name Jeremy at twenty-four, legally changing his name at twenty-five, and then to his late twenties when Jeremy and his parents become active advocates for the transgender community. Jeremy’s story is uniquely his, and is a story of slowly becoming, filled with uncertainty and compromise and self-reflection, with language and labels that evolve with identity, from tomboy to trans, and various iterations in between. Jeremy discovers who he is over the course of many years, with starts and stops along the way.

This book is recommended for those who identify as queer or have lived with uncertainty about their gender or sexuality, as well as their parents and family members, and also for non-queer readers who want a better understanding of what it means to be nonbinary or trans. The narrative is informative and reassuring and stresses the importance of love and acceptance. The physical book includes pictures that make the journey feel very real. The audiobook is also powerful because the voices telling the narratives are actually Jo, Jeremy, Sammy and Jenn Ivester, and the reader/listener hears Jeremy playing his music and singing his songs.

Note: The preface explains the decision to use Jeremy’s birth name in the memoir up to the point when he comes out and asks everyone to call him by his new name and pronouns. This decision was made with Jeremy’s consent.

(This review was originally published in our newsletter in December 2020.)